Click HERE to shop pearls, or scroll to the bottom of the article. Pearls are one of the classic "gemstones," found in nearly every jewelry store in the world. Pearls are not, however, true gemstones or minerals. By definition, minerals are formed by inorganic processes, and pearls are formed within the soft living tissue of a shelled mollusk.

To read about working with the energy of pearl, click HERE.

Chemically pearls are made of calcium carbonate, either the mineral aragonite or a mixture of aragonite and calcite, sometimes with minor vaterite. The shell contains small amounts of conchiolin, a hornlike organic substance; together with traces of aragonite, these are called nacre, or mother-of-pearl. A beautifully iridescent and durable substance, mother-of-pearl has been used for millennia for utensils, and for ornamentation such as buttons and inlays. The finest pearls are those produced by mollusks whose shells are lined with mother-of-pearl; such mollusks are limited to certain species of saltwater oysters and freshwater clams.

The shell-secreting cells are located in a layer of the mollusk's body called the mantle. When a foreign particle enters the mantle, the cells build up more or less concentric layers of pearl around the foreign particle. Baroque pearls are irregularly shaped pearls that have grown in muscular tissue; blister pearls are those that grow adjacent to the shell and are flat on one side.

Pearls are valued by their translucence, luster, play of surface color, and shape. The most valuable are spherical or droplike, with a deep luster and good color play. In the jewelry industry, saltwater pearls are commonly referred to as Oriental pearls; those produced by freshwater mollusks are called freshwater pearls.

Cultured pearls are those that have been grown on a pearl farm. A tiny sphere of mother-of-pearl is implanted in the mantle of the nacre-producing mollusk, which is then placed in the waters of the farm. The oyster forms a pearl around the tiny sphere, which is then harvested up to two years later. The first steps toward pearl culturing occurred hundreds of years ago in China, and Japanese pioneers successfully produced whole cultured pearls around the beginning of the twentieth century. These became commercially important in the 1920s (about the same time natural pearl production began to decline). From the 1930s through the 1980s, pearl culturing diversified and spread to various countries around the world. 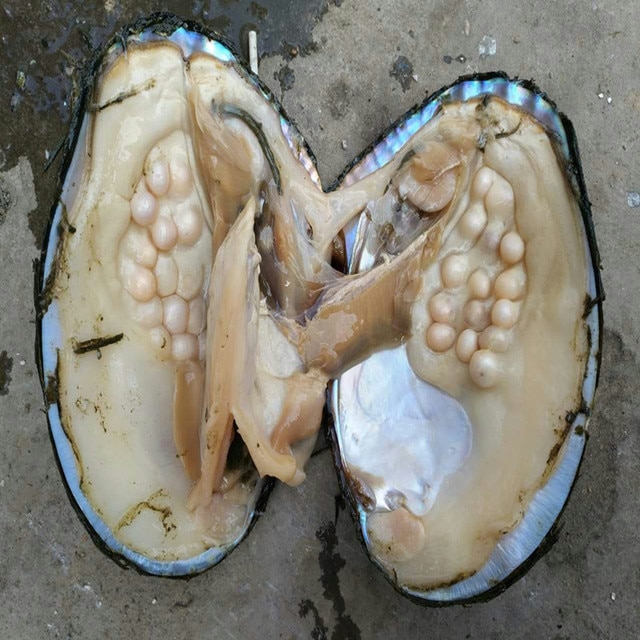 The color of pearls varies with the mollusk and its environment. A pearl can be any delicate shade from black to white, cream, gray, blue, yellow, green, lavender, and mauve. Pearls vary from the size of tiny seeds--called seed pearls--to one large baroque pearl that weighed 3 oz!

Some of the finest pearls are found in the Persian Gulf from Oman to Qatar, the waters between India and Sri Lanka, and the islands of the South Pacific. The Gulf of California, the Gulf of Mexico, and the waters of the Pacific coast of Mexico produce dark-hued pearls with a metallic sheen, as well as good quality white pearls. During Christopher Columbus’s third (1498) and fourth (1502) voyages to the New World, he repeatedly encountered native people adorned with natural pearls. His discovery of natural pearl sources in the waters of present-day Venezuela and Panama intensified demand in Europe. However, within a hundred years, these natural pearl sources had declined due to overfishing, pearl culturing, plastic buttons, and oil drilling. Freshwater pearling has been known in China since before 1000 BC, and there is a pearl industry in the streams of Bavaria. Freshwater pearls have also been recovered from the Mississippi River and several rivers in England and Ireland.

People have coveted natural pearls as symbols of wealth and status for thousands of years. A Chinese historian recorded the oldest written mention of natural pearls in 2206 BC. As the centuries progressed toward modern times, the desire for natural pearls remained strong. Members of royal families as well as wealthy citizens in Asia, Europe, and elsewhere treasured natural pearls and passed them from generation to generation. Pearls are treasures from the Earth’s ponds, lakes, seas, and oceans, and they’ve always embodied the mystery, power, and life-sustaining nature of water. In ancient Vedic texts, the pearl is born of the Earth’s waters and heaven’s powers, fertilized by a flash of lightning. It’s considered to be the daughter of the Moon. The spherical shape of some pearls led many cultures to associate this gem with the moon. In Western cultures, the pearl has astrological associations with the planet Venus. Like pearls, the goddess of love came from the sea. In ancient China, pearls were believed to guarantee protection from fire and fire-breathing dragons. In Europe, they symbolized modesty, chastity, and purity.