Click HERE to shop garnets, or scroll to the bottom of the article.

Garnet is the traditional birthstone for the month of January.

The belief that garnets have the power to shield their wearers from harm is very widespread. Saxon and Celtic kings favored garnet inlaid jewelry because of this supposed protection. Native American healers similarly believed that garnets had protective powers against injury and poison. According to Judeo-Christian tradition, King Solomon wore garnets into battle. During the Crusades, Christian and Muslim warriors both wore garnets.

Thousands of years ago, red garnet necklaces adorned the necks of Egypt’s pharaohs and were entombed with their mummified corpses as prized possessions for the afterlife. In ancient Rome, signet rings with carved garnets were used to stamp the wax that secured important documents.

The term carbuncle was often used in ancient times to refer to red garnets, although it was used for almost any red stone. Carbuncle was thought to be one of the four precious stones given to King Solomon by God. Although garnets can occur in almost any color, they’re popularly associated with the color red. Historically, red gemstones that modern gemologists separate into different species and groups — like rubies, spinels, and garnets — were often considered to be the same type of stone. For example, many ancient sources, even some sources from the 19th century, described gems known as “carbuncles.” This term typically referred to blood-red cabochon-cut gems of any type. Nowadays, this term is rarely used except when referring to antique or ancient gems.

Some carbuncles were said to shine as if they had an internal light. In fact, the word comes from the Latin carbuncles for small, hot coal. According to Jewish tradition, Noah brought a gem into the Ark as a source of light. During the Flood, the Sun and Moon didn’t shine, but this precious stone shone “more brilliant by night than by day, so enabling Noah to distinguish between day and night.” Some accounts refer to this gem as a carbuncle or, by association, a garnet.Centuries later, in Roman scholar Pliny’s time (23 to 79 AD), red garnets were among the most widely traded gems. In the Middle Ages (about 475 to 1450 AD), red garnet was favored by clergy and nobility.

Garnet’s color and inner fire could also presumably stir a person’s creative energy. Garnets have been symbolically associated with life force, especially the feminine life force.Red garnet’s availability increased with the discovery of the famous Bohemian garnet deposits in central Europe around 1500. This source became the nucleus of a regional jewelry industry that reached its peak in the late 1800s.

Garnets are a group of silicate minerals that have been used since the Bronze Age as gemstones and abrasives. These are widespread minerals, particularly abundant in metamorphic rocks. Garnet occurs in every color except blue and most varieties are named for their color. Although they form in many different colors, garnets are easy to recognize because they are generally found as well-developed crystals in one of the habits of the isometric (cubic) crystal system. There are 15 garnet species, all conforming to the general formula A3B2(SiO4)3, where A can be calcium, ferrous iron, magnesium, or manganese, and B can be aluminum, ferric iron, chromium, manganese, silicon, titanium, zirconium, or vanadium. The different species are pyrope, almandine, spessartine, grossular, uvarovite, and andradite. The garnets make up two solid solution series: pyrope-almandine-spessartine and uvarovite-grossular-andradite.

The gem varieties are elaborated on below, however, the Garnet Group (not to be confused with the Garnet Supergroup) consists of:

The most common garnet, Almandine is an Iron Aluminum Silicate. The name comes from Alabanda (now Araphisar), Turkey, where it has been cut since antiquity. Its crystals are dodecahedral and trapezohedral, and its color tends to be a pinkier red than other garnets. Rutile needles are sometimes present, and when cut into a cabochon, it often shows a four-rayed star. Almandine is found worldwide, in many places in well-formed crystals weighing 8 1/2 lb (4 kg) or more. When it occurs in metamorphic rocks, its presence indicates the grade of metamorphism. It also occurs widely in igneous rocks and is occasionally found as inclusions in diamonds.

Andradite garnet is a calcium iron silicate, which has several variety names, each related to its color. The yellowish variety is called topazolite, because of its resemblance to Topaz; yellowish-green or emerald-green forms are called demantoid or, commercially, Uralian emerald; black andradite is called melanite. Other colors are brownish-red, brownish-yellow, and grayish-green. The green of demantoid is caused by the presence of chromium; yellow to black is due to titanium. Andradites make spectacular gems, with greater color dispersion than diamonds. Andradite is commonly found with grossular garnets in contact-metamorphosed limestone, and in mafic igneous rocks. Gem demantoid comes from Ural and Chutosky Mountains of Russia, and Valmalenco, Italy; topazolite from Saxony, Germany, and California.

This garnet was originally posted by Chemistry in Pictures.

“This gemstone isn’t pure andradite garnet [Ca₃Fe₂(SiO₄)₃], but its flaws produce its mesmerizing colors. Some gemologists think that this rainbow explosion arises because the garnet’s different elements aren’t regularly spaced from the core of the gemstone to the outside. For example, in some regions, aluminum atoms might have worked their way into the structure and replaced the iron atoms. These irregularities create mismatched sheets of atoms that then bend and stretch. This makes the stone birefringent, meaning that light travels through it at two different speeds. Under cross-polarized lighting conditions, rays of light that enter get misaligned by the time they exit, so they then interfere with each other and highlight some colors in certain spots, producing the spectrum seen here. The black flecks are tiny pieces of magnetite that were enveloped by the crystal as it grew.” In reference to its gooseberry-green color, the calcium aluminum silicate grossular is named for the Latin grossularia, "gooseberry". Its predominantly dodecahedral crystals can also be white, colorless, pink, cream, orange, red, honey, brown or black. Crystals up to 5 in (13 cm) are known. When reddish-brown its called Hessonite. Grossular is ordinarily found in both regional and thermal calcium-rich metamorphic rocks, and occasionally in meteorites. Massive greenish grossular is sometimes marketed under the name South Aft=ricanm=, or Transvaal, jade. Most grossular is opaque to translucent, but transparent, pale to emerald-green faceting material (marketed as tsavorite in the US and tsavolite in Europe) comes from Kenya and Tanzania. Named in 1803 from the Greek for "fire" and "to appear", pyrope garnet has also been called Bohemian garnet, or cape ruby. Its color can be dark red, violet-red, rose-red, or reddish-orange, depending on its composition. Iron, chromium, titanium, and manganese all substitute in the structure, and all are coloring agents to some degree. High-chromium pyrope can exhibit an alexandrite (color change) effect. Its crystals are dodecahedral and trapezohedral, although it is most often found in rounded grains or pebbles. Pyrope is a high-pressure mineral found in metamorphic rocks and in very high-pressure igneous rocks such as peridotites and kimberlites. Although it is relatively widespread, large cut gems (of more than 10 karats) are uncommon. 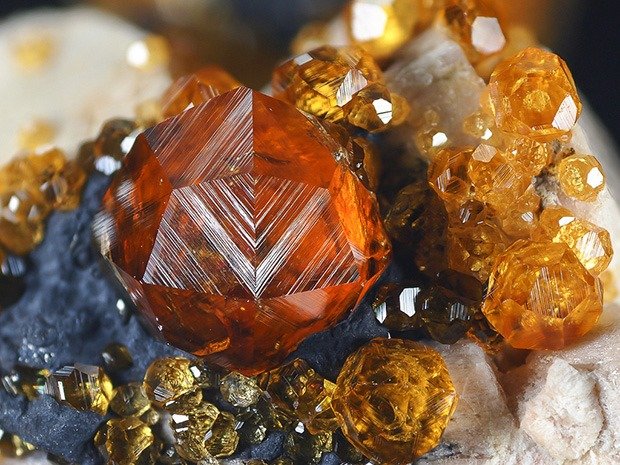 Named for Spessart, Bavaria, Germany, the type locality, spessartine garnet is manganese aluminum silicate. Its crystals are dodecahedral or trapezohedral, and its colors can be pale yellow when nearly pure, to orange or deep red. Pure spessartine is relatively rare--it is almost always mixed with some amount of almandine, giving the orange to red coloration. Pure spessartine is ordinarily found in manganese-rich metamorphic rocks, and in granites and pegmatite veins. Gem-quality spessartine is rare, and stones are cut more for collectors than for use in jewelry. The Rutherford Mine in Virginia produces some of the largest spessartines. An intermediate spessartine-pyrope composition is sometimes called Malaya garnet.

The rarest of all the gem garnets is Uvarovite, the calcium chromium silicate. It was named in 1832 for the Russian nobleman Count Uvarov. Its predominantly dodecahedral crystals are almost always too small to be cut. Uvarovite's brilliant green color comes from chromium - the same coloring agent that is in ruby and emerald, which is known to have an inhibiting effect on crystal growth. It is probable that uvarovite's small crystals are a result of this. Uvarovite is found in chromium-bearing igneous and metamorphic rocks. Some of the largest crystals come from Outokumpu, Finland.

Garnets range from 7.0 to 7.5 on the Mohs Scale of hardness and are found in the U.S., South Africa, Argentina, Australia, Brazil, Myanmar (Burma), Scotland, Switzerland, and Tanzania. Garnets are formed when high temperatures and/or pressure are a factor and geologists often use garnets as a gauge of the amount of temperature and pressure that was present during their formation.