Rhodochrosite ~ Mineral of May '19

Mineral of the month - Rhodochrosite 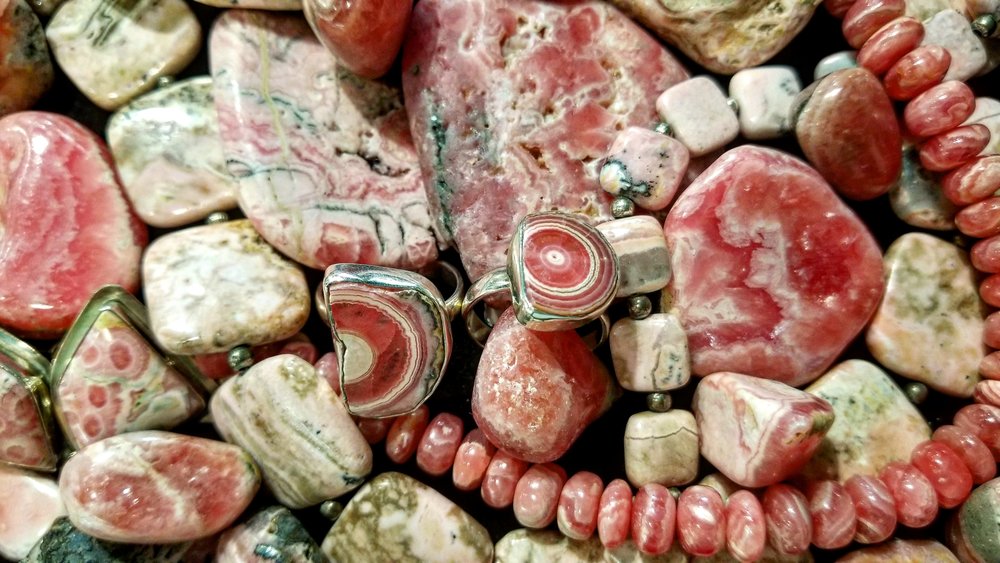 Taos Rockers mineral of the month is Rhodochrosite, a manganese carbonate.The name rhodochrosite comes fromthe Greek ρόδο, "rose", and χρώς, "coloring", referring to its color and was named in 1813 by Johann  Friedrich Ludwig Hausmann for the occurrence in what is now known as Romania.

The cause of rhodochrosite's pink to red coloration is due to manganese (Mn2+).  It forms a complete solid solution series with the iron carbonate (siderite).  Calcium, magnesium and iron can all substitute for the manganese in rhodochrosite giving a chemical formula of (Mn, Fe, Mg, Ca) CO3. Increased iron shifts the coloration into the brown range.  The red coloration occurs when the iron content is minimal.

Rhodochrosite commonly occurs as a primary gangue mineral in moderate- to low-temperature hydrothermal veins, also in high-temperature metasomatic deposits and sedimentary manganese deposits or as a late stage hydrothermal mineral in pegmatites.
It may be formed as a biomineral by some fungi (Lichenothelia).

Rhodochrosite tends to form in layers in the open spaces within sedimentary or metamorphic rocks.  It precipitates out of ascending fluids as vein and fracture-filling  or out of descending solution  as layered accumulations on the walls of cavities in the form of stalactites and stalagmites.  In either case, repeated episodes of crystallization build up layers, each of which can be a unique event that results in material with slightly differing composition and color.  Well-formed crystals are rare.  The deposits at the Sweet Home mine, near Alma, Colorado, are known for their excellent crystalline specimens

Rhodochrosite is rarely confused with other minerals.  Its pink color, perfect cleavage in three directions, low hardness and weak effervescence with cold dilute hydrochloric acid are all properties not commonly shared with other minerals.  Some confusion occurs between the pink-colored minerals with similar names - rhodochrosite and rhodonite.  Rhodonite is the manganese silicate which has a hardness of 5.5 to 6.5.

Rhodochrosite can be an ore mineral for manganese, however, it rarely forms in the concentrations necessary for economic  extraction.  Most uses are for lapidary/jewelry purposes  and mineral specimens.  It is often slabbed (cut in thin sections) to emphasize its banding or concentric patterns and used in lapidary fabrication (ie boxes) and to make cabochons.  It is not often faceted into gemstones due to its softness and perfect cleavage.

It is found in a small number of locations worldwide where other manganese minerals are usually present..Rhodochrosite for lapidary and mineral specimen use is only found in a few locations worldwide. These include Argentina, South Africa, Peru, Montana, Colorado, Russia, Romania, Gabon, Mexico, and Japan.

Some of the mineral locales from which specimens of Rhodochrosite are available at Taos Rockers include:

Melody, in her book Love Is In The Earth, says Rhodochrosite"has been called a ‘stone of love and balance’…It contains a pulsating energy which emits the strongest power in the universe, the power of love...Rhodochrosite can also both gently and quickly balance the emotions, providing for stability, and for both the order and structure, to the mind"